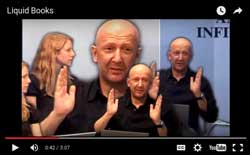 Culture Machine Liquid Books is a series of experimental digital books published under the conditions of both open editing and free content. As such, you are free to annotate, tag, edit, add to, remix, reformat, reversion, reinvent and reuse any of the books in the series — and what’s more you are encouraged to do so. The most interesting results of such open editing and writing — as chosen by Culture Machine’s editors and peer-reviewers — will be ‘frozen’ and published by OHP on the main Culture Machine site as new versions of volumes in the Liquid Books series in their own right.

Anyone interested in contributing a volume to Culture Machine Liquid Books should contact the series editors Clare Birchall and Gary Hall.

More at the Liquid Books wiki…

By creating twenty one ‘living books about life’ in just seven months, the series represents a new model for publishing, in a sustainable, low-cost manner, many more such books in the future. These books can be freely shared with other academic and non-academic institutions, organisations and individuals. Taken together, they constitute an interdisciplinary resource for researching and teaching relevant science issues across the humanities, a resource that is capable of enhancing the intellectual and pedagogic experience of working with open access materials.

All the books in the series are themselves ‘living’, in the sense they are open to ongoing collaborative processes of writing, editing, updating, remixing and commenting by readers. As well as repackaging open access science research – along with interactive maps, visualisations, podcasts and audio-visual material – into a series of books, Living Books About Life is thus engaged in rethinking ‘the book’ itself as a living, collaborative endeavour in the age of open science, open education, open data and e-book readers such as Kindle and the iPad. The Living Books About Life series thus acts as a companion project to the Culture Machine Liquid Books series (http://openhumanitiespress.org/liquid-books.html), also published by Open Humanities Press.

Living Books About Life was funded by the Joint Information Systems Committee (JISC), and is a collaboration between Open Humanities Press and three academic institutions: Coventry University, Goldsmiths, University of London, and the University of Kent.

More at the Living Books About Life site. 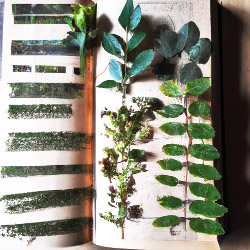 Combinatorial Books: Gathering Flowers explores the rewriting of books in the Open Humanities Press (OHP) back catalogue. With this series we are experimenting with ways of encouraging readers/writers to actively reuse existing open access book content that is published using Creative Commons licenses. As long as they do not include the ND: no derivatives element, Creative Commons licenses make it possible for both books and the text they contain to be copied, remixed, built upon, translated, and reused in any medium, so long as the ‘original’ author is credited (if the particular CC license applied contains the BY element). What’s more, collaborative open writing and editing tools enable the reworking of published works by communities of authors. They thus have the potential to help us move us even further away from modernist, Euro-Western conceptions of the fixed and finished autograph text that is produced by a single, self-identical (liberal humanist) author working in isolation from all human and nonhuman others. Despite what open licensing affords, very few people or presses take advantage of the possibilities for such experimentation and reuse, other than producing translations.

With the Combinatorial Book series we want to address the unfamiliarity of readers/writers with the kind of tools and environments that provide opportunities for more collective, emergent and processual ways of creating and publishing open access books, along with some of the cultural barriers that continue to exist around the integrity of the academic monograph and fear of derivatives. The way in which we want to do so is through combinatorial creativity. This is the process of combining existing ideas to produce something new. While examples of combinatorial creativity can be found in contemporary remix cultures, the cutting and pasting of texts to create new manuscripts can be traced all the way back to the practice of compiling scrapbooks or so-called commonplace books in early modern times. An even older medieval version of the commonplace book is the florilegium (plural florilegia). Both ‘anthology’ and ‘florilegium’ translate as ‘gathering of flowers’ - from the Latin flos (flower) and legere (to gather). The florilegium, then, is literally a collection of plant illustrations. However, the term was also used to denote a compilation of excerpts from other writings. Hence our choice of subtitle for the series: Gathering Flowers.

In collaboration with the COPIM project, we have developed a publishing workflow that enables the creation of new combinatorial books out of those OHP books published under a CC licence that means they are available for reuse. We now invite authors or groups of authors to collaborate on rereading/rewriting/reworking one of the books (or several volumes) from the Open Humanities Press catalogue by remixing it, editing it, adding to it, annotating it, revising it, translating it, or marking it up, even completely recreating it using an Open AI text generator such as the open source GPT-Neo and GPT-J, if they wish.

To contribute to the series, please contact Janneke Adema and Gary Hall.

Anyone who has an idea for an experimental liquid/living book that does not fit into the models described should contact Gary Hall.